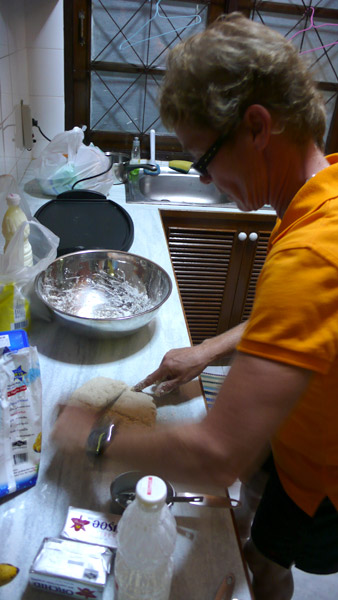 This is Patsy. She’s from Belfast, Northern Ireland. She teaches swimming at a school in Rayong, Thailand. She also bakes for a lot of the local restaurants in the area.

I tried her soda bread and kindly asked if she would show me how to bake it. She came over, showed me soda bread, potato bread and how to make a kiwi pavlova! Very exciting indeed. She’s even sent over the recipes she uses which I’ve posted here along with some photos from our baking day. Anything in italics are my notes for American readers. 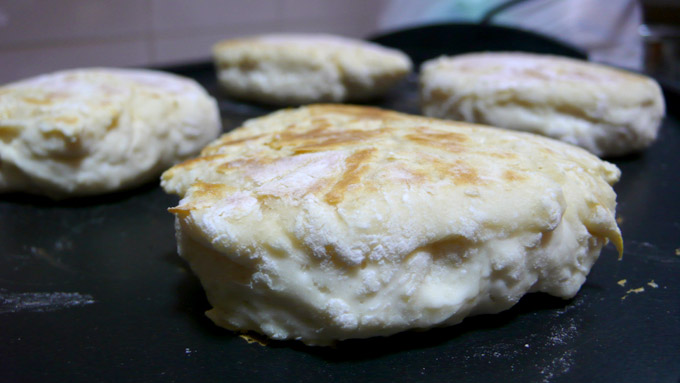 This bread is popular throughout Ireland. Because it is easily and quickly made it is often baked fresh for tea or even breakfast. At home we used to call the loaf made with white flour soda bread, while that made with wholemeal (whole wheat flour) was wheaten bread. In other parts of the country wheaten bread is referred to as brown soda or, confusingly, soda bread!

Wheaten bread or brown soda is made in exactly the same way but with wholemeal (whole wheat) flour replacing all or some of the white flour; this mixture will probably require less buttermilk. Another variation is to add 1/2 cup of sultanas (raisins) to the white bread.

Note from Cee: Patsy says there are two ways of cooking soda bread – in the oven as in the above recipe, or on a griddle. She said she cooks it on a griddle most often and that’s how she showed me how to do it (see photo above). If cooking on a griddle, separate above dough into four rounds and flatten on a well floured surface to about 1/2″ thick. Score a cross into it and cook on medium heat for about 5 minutes on each side. Press the sides to check doneness – it should spring back. Once cooked, you can snap apart at the scores and have 4 triangle shaped soda breads called “farls”. She also used more baking soda than in this recipe, about 3x as much, perhaps due to the humidity in Thailand to help it rise. She does not add sugar. 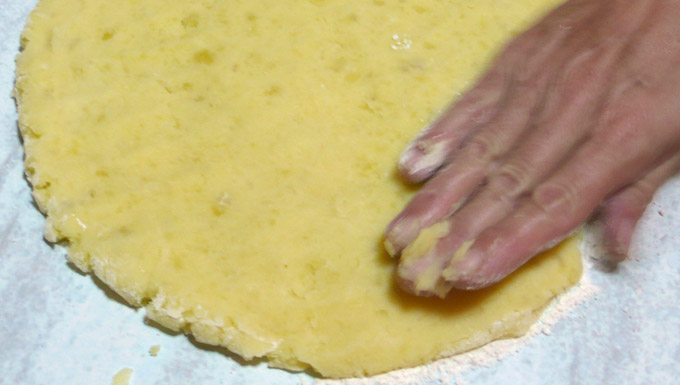 Also known as potato cake or potato bread, this is very much a northern dish. It is an important – indeed essential – constituent of the Ulster Fry, alongside bacon, egg, sausage and perhaps fried soda farl. (Ulster Fry is a giant Irish breakfast)

The recipe calls for cooked, mashed potatoes. These should be freshly boiled, or, better still, steamed and passed through a food mill, and used warm.

Melt the butter and mix into the potatoes with the salt. Work in the flour quickly but thoroughly and knead lightly. Divide in two and roll out each half on a floured board to form a circle about the size of a large dinner plate. Cut in quarters (farls) and cook for about 3 minutes on each side in a heavy frying pan in a little bacon fat.

Note from Cee: Patsy says to make potato bread is quite easy, you don’t really need to measure anything. Simply take as many potatoes as you like and boil them until really soft. Make mashed potatoes like you do normally with butter and salt, but make sure they’re really well mashed and not lumpy. Add a wee bit of flour and mix. She did not use as much flour as the recipe above. Turn out onto a well floured surface and pat into a pancake 1/2″ thick. Cut into quarters (farls) and fry on a medium griddle until light brown. She used one of those non-stick electric griddles which doesn’t require grease. 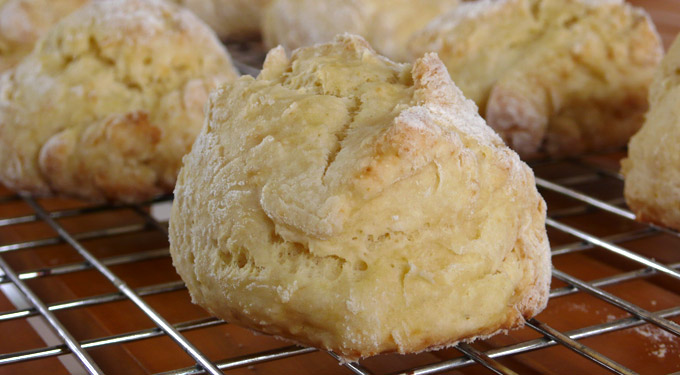 Morning coffee and afternoon tea would not be complete without fresh scones, and there are so many delicious varieties. The secret of making good scones is a quick, light hand when mixing, and a hot oven.

Preheat oven to gas mark 8 / 230°C / 450°F. Sift flour with salt and rub in butter or margarine. Make a well in the centre and pour in the egg and most of the buttermilk. Mix quickly to form a soft dough, adding a little extra buttermilk if necessary. Turn out onto a floured surface and roll out lightly until 2.5cm / 1 inch in thickness. Working quickly, cut into 5cm / 2 inch rounds. Glaze with egg or milk and set on a floured baking sheet. Bake for 15-20 minutes until light brown.

Savoury Cheese and Herb Scones
Add 1 teaspoon dry mustard, 50g / 2oz grated cheese and 2 tbsp fresh, chopped herbs to the dry ingredients and proceed as before. After brushing with egg or milk, scatter a little grated cheese on the top of each scone.

Did you treat your Mary Ann to some dulse and yellowman,  At the Auld Lammas Fair in Ballycastle-O?

Dulse is a purple edible seaweed. I remember buying it at a penny a bag as a child when sweets were hard to get at. It can also be stewed for a couple of hours and eaten as a vegetable or with oatcakes. It is not known much outside the north of Ireland – and it is no great loss!

Yellowman is a different matter all together. This toothsome, honeycombed, sticky toffee is traditionally sold at the Auld Lammas Fair at the end of August.

In a large saucepan slowly melt together all the ingredients except the baking soda. Do not stir. Boil until a drop hardens in cold water (240°F, 190°C on a sugar thermometer). Stir in the baking soda. The toffee will immediately foam up as the vinegar releases the gas from the baking soda. Pour out onto a greased slab and while just cool enough to handle fold the edges towards the centre and pull repeatedly until the whole is a pale yellow colour. Allow to cool and harden in a greased tin and break into chunks with a toffee hammer – or anything else that comes to hand

The “Irishness” of this lovely chocolate cake is thanks not only to the wonderful liqueur used in the filling, but also to a certain, very Irish, ingredient in the cake mixture itself, which contributes to its moistness.

Preheat oven to gas mark 5 / 190°C / 375°F, and grease and line two 20cm / 8 inch cake tins. Sift flour and salt into a mixing bowl. Melt chocolate in a bowl placed over a saucepan of hot water. In a separate bowl, cream butter and sugar together until fluffy, then beat in the chocolate and mashed potato. Gradually beat in the eggs, adding a little flour with each addition. Fold in the rest of the flour and stir in the milk.

Divide mixture between cake tins and bake for 25-30 minutes or until top is firm but springy to the touch. Remove from oven and after a few minutes, turn out on a cooling rack. While the cake is cooling, make the filling. Melt the chocolate as before, stir in the other ingredients and mix well. Use the filling to sandwich the sponge layers together and coat the top and sides of the cake.